From the 2021-22 season, we will be supporting the Collegium Musicum Basel as the new main sponsor.

The Collegium Musicum Basel is the city’s oldest independent professional orchestra and a key contributor to its diverse music scene. It links traditional classical sounds with new interpretations and bravely ventures into uncharted musical territory. The name “Collegium Musicum Basel” is synonymous with commitment. It is also associated with a tradition in Basel that goes back 300 years. 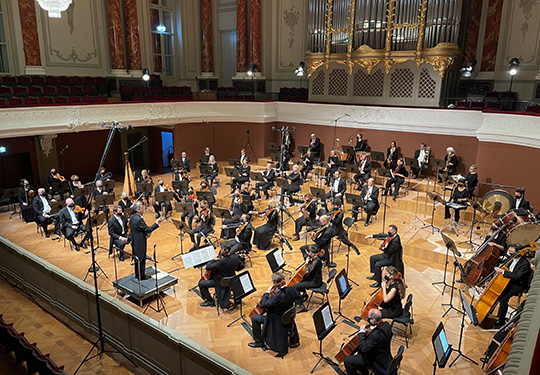 With its six-concert subscription series at the Stadtcasino Basel, the Collegium Musicum Basel has been a fixture of the music scene in Basel since 1951 .

It also attaches a lot of importance to promoting young talent, for example through the concerts that have been held for decades with young soloists who have won awards at the ARD International Music Competition in Munich. In the concerts leading up to the main concert, up-and-coming musicians from the City of Basel Music Academy are given the chance to showcase their talents in front of a large audience in a large concert hall. In addition, the Collegium Musicum Basel hosts a concert every season aimed at young people. This is also performed at schools in Basel.