Gruyère, Beaufort, Cheddar: many a cheese is cultivated and cured by machines from Romont. Since summer 2018, these are no longer supplied by two SMEs, but only by one. Sugnaux Electromécanique SA and JNJ automation SA have joined forces – thanks to the efforts of Bank CIC.

The medieval town of Romont and its castle can be found on a hilltop in a landscape of lush meadows. Romont has been a centre of the dairy industry and cheese production for many centuries. This tradition is continued with innovation.

As in the niche market of robots for cheese curing. Until recently, this market was dominated by three companies, two of them from Romont: Sugnaux Electromécanique and JNJ automation. In the summer of 2018, the former came closer to the latter, a process that required a lot of patience.

From employees to entrepreneurs

"Michel Sugnaux, founder of Sugnaux, launched the first robot for the curing of hard cheese in 1983", explains Joël Jaquier, Commercial Director at JNJ automation. He has known his former competitor for longer than his own company: "I worked for Sugnaux for 28 years." During this time, he worked with Jérôme Nicolet for 17 years and with his brother Sébastien Jaquier for five years. 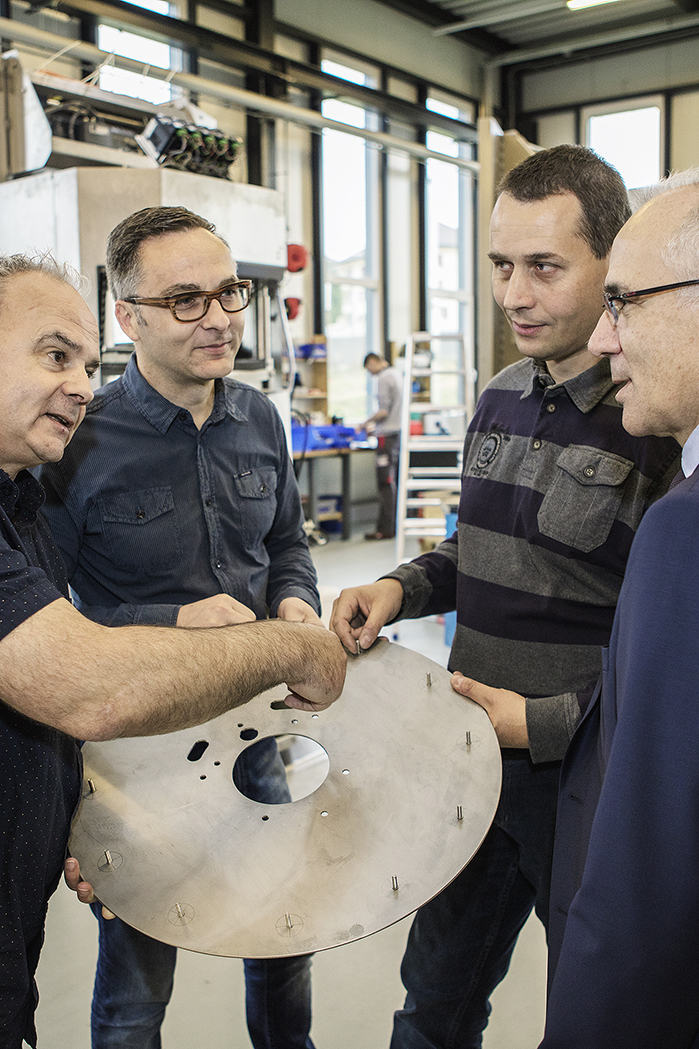 Joël Jaquier, Sébastien Jaquier and Jérôme Nicolet of JNJ automation SA decided to bet everything on the development of new cheese robots.

In 2008, a second cousin of the Jaquier brothers wanted to sell his company. The three colleagues made use of this opportunity and bought the company together. At that time it manufactured packaging machines and cheese robots. But the trio quickly decided to change their focus and to bet everything on the development of new cheese robots. With success. They started with 18 employees and now have 75. They are also planning to build a new factory to cope with rising demand.

"Our former employers, the Sugnaux brothers, were originally less than enthusiastic about our activities", admits JNJ chairman Sébastien Jaquier. "To prevent us from making life difficult for one another, we thought about a shared future. But we soon realised that the Sugneaux family didn't want to invest in dialogue."

A case for Bank CIC

A good thing then that a friend of Sébastien Jaquier had a positive experience with Bank CIC and told the three of them about it. Sébastien Jaquier started listening attentively when he heard that Bank CIC had people specialising in mergers and acquisitions. Maurizio Pierazzi, Head of Corporate Finance at Bank CIC in Neuchâtel, soon gained his confidence – as well as that of Sugnaux Electromécanique.

Thanks to the efforts of Bank CIC we were able to enter into dialogue and find a solution that suited both parties.

"It's different when a bank calls rather than a competitor", says Jérôme Nicolet, Technical Director at JNJ automation. "After all, the bank doesn't just offer financial advice. It helped us enter into dialogue and find a solution that suited both parties."  Maurizio Pierazzi met with representatives of Sugnaux and explained carefully that an offer for a partnership with their company has been made. "We only divulged the name of the interested party after the Sugnaux family confirmed their interest in the deal", says Maurizio Pierazzi, who then invited both parties to the table.

The Sugnaux brothers asked for time to think about the offer. After two months they agreed to a partnership with JNJ automation. Maurizio Pierazzi coordinated the entire negotiation process, from due diligence to signing of the contract. What exactly convinced the Sugnaux family to agree? "Our relationship is shaped by mutual respect", say Joël and Sébastien Jaquier and Jérôme Nicolet in agreement. "The Sugnaux family was convinced by our intention to strengthen the position of Romont."

All Sugnaux employees and their two bosses, Alain and Marc Sugnaux, now work for JNJ automation. According to Sébastien Jaquier, the Sugnaux brand will not disappear, but will be repositioned and strengthened. "We want to offer more services and products relating to dairy processing under this brand."

The machines of JNJ automation are 100% made in Romont. Up to 70% of their machines are exported to France, Austria, the UK, Canada, the US and increasingly also to Russia. It therefore comes as no surprise that the new building, which was commissioned in spring 2014, is already reaching the limits of its capacity. Building work will start again soon as the factory space has to be doubled. The industry is continuing to gain ground in the dairy region around Romont.